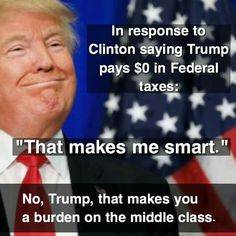 It is easy to see that the Republican party has changed over the last several decades. In the Nixon years, they switched with the Southern Democrats and became the party of racists. In the Reagan years, they became the party of low taxes and small government; a libertarian twist that favored the wealthy and ignored the poor. Since everyone got their taxes reduced, they gave the illusion of being champions for the middle class as well. In the Bush I years they saw a brief return to a more moderate advocate for the white and wealthy. It is difficult to determine if Clinton was a liberal Republican or a moderate Democrat, but since the Republicans hated him so much I would go with the latter. During the Obama years, they became more racist and morphed into the party of obstruction. It took the election of Donald Trump for decency to become completely extinct and the basest human instincts to reign supreme.

Trump, a malignant narcissist, has empowered the delusional, the deranged, and the deplorable alike. The Republican party has become a haven for sociopaths and scofflaws. They seem to believe the norms and mores of society are no longer restrictions on their behavior. Those who don’t pay taxes are viewed with admiration. Income inequality is seen as something that should be nurtured. White supremacists are welcomed with open arms. Conspiracists are treated as serious intellectuals. If you had seen an episode of The Twilight Zone or The Outer Limits that featured a group, whose members included national leaders, that worshipped Satan and drank the blood of frightened children, you would have found the plot too ludicrous for fiction. But, this is the basic belief of Qanon, a group that includes Republican members of Congress.

The latest iteration of the Republican party embraces tax cheating. For years the Republicans have been cutting the IRS budget and enacting regulations that have made the IRS a toothless beast when it comes to enforcement. True to their belief that the rich are better people than the poor, the most common IRS investigation involves the Child Tax Credit. The IRS must rely on voluntary compliance. Their data suggest that for those who earn ordinary wages or salaries, noncompliance is about 1%, while it is an estimated 55% for those whose income is not reported by third parties (partnerships, proprietorship, real estate owners). Most of the people in the latter category are high-income earners who can misreport earnings and get away with cheating.

The Biden administration successfully negotiated an international agreement for a global corporate tax rate of 15%. How the Republicans attack this remains to be seen. A part of “Build Back Better” is intended to address the inequalities in our tax collection system. It would raise a tremendous amount of income more equitably so of course, the Republican party had to do everything they could to demonize it. In an effort reminiscent of the “death panels” attack on the Affordable Care Act, they painted the legitimate attempt to strengthen the IRS enforcement division as a surveillance attack directed at low and middle-class taxpayers.

Such intellectual luminaries as Kevin McCarthy and Jim Jordan have led the misinformation campaign. “Democrats,” McCarthy ranted “want to track every penny you earn so they can then tax you and your family at the maximum possible amount.” While it is true that Democrats, along with all supporters of democratic republics, want everyone to pay the full amount of taxes owed, the statement is misleading. The IRS already knows every penny that you and your family earn, it is included in a form called W-2. The bill targets tax cheats that under-report income from sources that don’t require a form like W-2. Under provisions of the act, banks would be required to submit annual reports on accounts with total deposits and withdrawals exceeding $10,000, excluding paycheck and government benefits. This will not affect the average taxpayer in the least, but would greatly enhance the IRS’s efforts to track unreported income.

I am returning to a recurring theme in my recorded observations and that is that we are now dealing with a Republican party without morals. The only goal is to maintain power and personal income. Their most ardent followers are, to put it mildly, ignorant and proud of it. Many are certifiably crazy and an ever-growing number of them are dangerous. The quandary for the sane among us is how to deal with these people. They are crude, rude, misinformed, and, I believe beyond reach.